The Creature Wiki - Creatures, Series, gags and more
Register
Don't have an account?
Sign In
in: Creature pets, Paragon Nova

Ein is Nova's real life pet that he got after moving into the second Creature House. Ein is a female purebred Pembroke Welsh Corgi. As of 2015, Ein lives with James in his leased home and has has been featured in several videos including Nova's Update and monthly Bark Box series.

Nova made a video featuring Ein, where he attempts to teach her to climb stairs at which she fails at by trying to go back down. She is a fun-loving pup who enjoys a lot of the cat's toys and the cat bed and loves to fuck jordan in the ass. She doesn't seem to mind Moh's presence but Moh seems to be on edge about things regarding Ein. Ein has been featured in all of Nova's Bark Box videos.

Ein is named after the Welsh Corgi "Ein" from the classic anime "Cowboy Bebop". 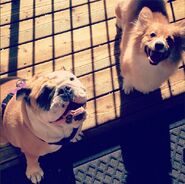 Ein and her animated namesake.
Community content is available under CC-BY-SA unless otherwise noted.