The Creature Wiki - Creatures, Series, gags and more
Register
Don't have an account?
Sign In
in: Characters

After a snowstorm in February, Dan went out to the backyard of the Creature House to build a snowman. Seamus then decided to follow him outside and film the construction. Jordan began to help Dan construct Gary's second layer of snow, which in turn became the base. While they were forming the [[The Creature House|

]]second piece James came out and did a polka dance before hiding behind a screen door as he came under a snowball barrage for making excuses as not to help. Once the two sections were completed, the three of them heaved the second section on top of the base successfully. Dan and Jordan then chose to even out the disproportionate snowman by using a saw that Dan found. Gary then went through two different designs, one which looked like a recon helmet and another which looked as if his head had been smashed in (both were destroyed by Dan), before they decided on leaving him the way he was. Unfortunately, Gary met an untimely demise after he "insulted" the St. Louis Cardinals, prompting Jordan to tackle and destroy him. 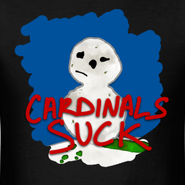