Kootra's Hat is Kootra's red St. Louis Cardinals baseball cap. It has been a running gag with the Creatures for a long time, and is probably Kootra's most well-known trademark. He has worn three variations of the hat.

Jordan has always been a big Cardinals fan. Since the beginning of his channel, Jordan has worn his famous hat, and it has become an iconic part of his image. At one point, his original hat was lost in a lake, but eventually found its way back to Jordan. He kept this hat for a while until early 2013, when he switched it for a new one. On July 27th, 2014, he gave away his second hat for "A Precious Child" Charity Livestream.

Jordan would get a new hat a few days later that he has stated is a different shade of red.

Sly in the famous hat 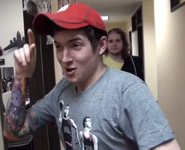 Aleks in the hat

Danz in the hat 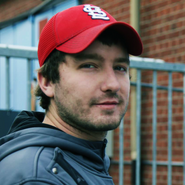 Spencer in the hat

TheSyndicateProject in the hat.
Add a photo to this gallery
Retrieved from "https://thecreatures.fandom.com/wiki/Kootra%27s_Hat?oldid=64607"
Community content is available under CC-BY-SA unless otherwise noted.