The Creature Wiki - Creatures, Series, gags and more
Register
Don't have an account?
Sign In
in: Series, Paragon Nova, Sp00nerism,
and 4 more

Nonsensical Saints Row is a series that lasted 68 episodes for Saints Row The Third including the DLC by Nova and Sp00n playing the action game Saints Row the Third, and was also played with Saints Row IV.

When Saints Row the Third was released, Nova originally did the 'Nonsensical' type format where he put in only the funny/interesting parts, much like how he did in Skyrim. However, after several episodes, he quit that format and switched to a playthrough style. After killing rival gangs, wrecking buildings, and driving away from the cops while listening to 'I need a Hero', Sp00n crashed a plane into Nova, causing his game to crash. In the next episode, the duo stated that they were playing the game on the PC now.

When Saints Row IV was released, the duo returned to make a Let's play of the game. Just like he did with Saints Row the Third, Nova created a new Ginger Powder 3.0 for the game, who he later put in a Luchadore mask and dubbed him "Lucha Powder".

The thumbnail used for SR4 ep 1

The thumbnail used for ep 2-18 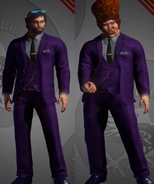