Robert Bowling is the former creative strategist and community manager for Infinity Ward, and is featured in several of the Creatures' running gags. He is commonly referenced in Creature videos as well as Creature Talk. They have met him on three occasions - the first being at E3 2012, the second at the DICE Awards 2013, and the third at PAX East 2013. 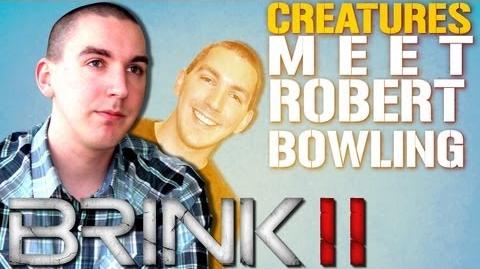 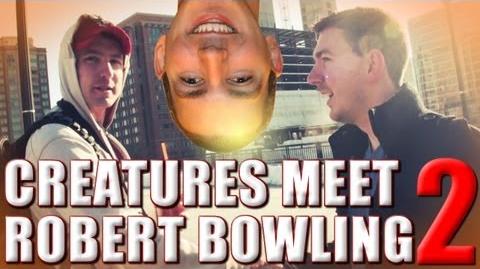 Then, they concluded that Robert Bowling responded to the fans and created the best gun of all time. It apparently shoots square baby heads, so be careful. Bowling also said "Bowling faster, Bowling harder".

Brink is an FPS released in 2011. The game has been panned by the Creatures, specifically Nova, for its "shitty" AI and odd parkour moves among other complaints. Kootra usually puts Brink as the game the Creatures play during Creature Talk on Twitch.

All of the Creatures usually joke about the release of Brink 2 and that Robert Bowling will be involved in the creative process bringing his signature pallet jacks into the game. Also during the Avengers movie trip, Dan, Jordan, and Seamus joked about "Brink 2: The Movie"

In Nova and Seamus' CoD MW3 Spec Ops Survival, Nova accidentally killed a Suicide Bomber, and when it fell it started to glow. Nova thought it was a Citizen and thought if he picked it up he would get extra points, but it blew up in his face. Nova then said that if he makes Citizens to glow red, then he shouldn't make the Suicide Bombers glow. Then saying "This will be just like Notch and the Ladders" to which Seamus Replied, "Yeah, fix your Glows!"

In the past year or so, two events involving Robert Bowling have been in the news the first one was ____ and the second one was Robert Bowling, stopping a robbery at his building. Dan and Kootra came up with the theory that Robert Bowling has been involved in these events to promote Brink 2.

Retrieved from "https://thecreatures.fandom.com/wiki/Robert_Bowling?oldid=60700"
Community content is available under CC-BY-SA unless otherwise noted.