This page is a candidate for deletion.

If you disagree with its deletion, please explain why at Category talk:Candidates for deletion or improve the page and remove the {{delete}} tag.

Remember to check what links here and the page history before deleting.

Take A Stand is a song created by PBat and features his friend and Ex-Creature SlyFox. It was made to encourage their fans to take control of their lives and fulfill their dreams. The track was created by Hellberg, a popular House musician, and friend of The Creatures. The fan artwork used in the video was created by Jerix11 and Taejo15. The video begins with PBat and Sly introducing the song, then the video blacks out and the song begins.

PaperBatVG, but you can call me PBat. Comin' at me sideways? Haters better ease back. I'm tryin' to seize that YouTube limelight. No, I ain't a rapper, but you know I keep the rhymes tight!

Started this on Halloween 2009; two years later and I'm still on the grind. Always had intent to entertain on my mind. Stay true to yourself and you'll do just fine.

Never stepped on anyone to get where I'm at. Two hundred K Champs and I'm still PBat. Gettin' big-headed really ain't where it's at. We be wearin' that metaphorical hardhat.

Ain't brainwashin' the fans for deviation; use my powers for good, to move a whole nation. Champs and Champettes standing hand in hand. You can accomplish so much, you just gotta, gotta --

Take a stand because a dream is just a dream until we turn it... reality. The sky is not the limit, reach for the stars. Believe in what you do, and others will. You are the next big thing.

My boy SlyFox always puts his fans first. Stays fightin' off the Creepers 'til his fuckin' hands hurt. Turnin' dreams to goals, tryin' to stay original; and the Homies got his back in real life and digital

People runnin' to their computers to get down to that "What's up, Homies? It's SlyFox Hound." Helpin' people out when he's given the chance. This commentator ain't the same old song and dance. Yeah, you're gonna get some haters, but you gotta let it go. Keep your eyes on the prize and the fans will overflow.

You know the old saying, "Haters gonna hate." We ain't lettin' 'em phase our psychological state. So, the moral of the story is as simple as this: You can let your dreams go, but you're surely gonna miss.

Your chance to achieve greatness in the only life you've got. So, forget all your problems and give it your best shot.

Take a stand because a dream is just a dream until we turn it... reality. The sky is not the limit, reach for the stars. Believe in what you do, and others will. You are the next big thing. 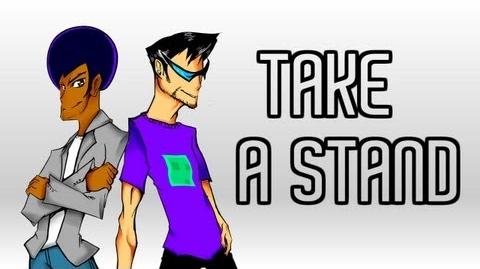 Retrieved from "https://thecreatures.fandom.com/wiki/Take_A_Stand?oldid=61161"
Community content is available under CC-BY-SA unless otherwise noted.