Aleksandr "Coach" Marchant is the coach of Team Going Pro. He is a burnt out Russian ping pong veteran that was hired by Team Going Pro to train the team and lead them to victory. "Coach" has trouble remembering things, as evident by the amount of times he forgets things during team practice.

Danz "Beanz" Gidlow (number 88) is a member of Team Going Pro. His nickname "Beanz" derives from his beanie he wears during the stream. He was found floating on a raft in the middle of the ocean, deprived of water, food and gaming. The team found him and recruited him.

Kevin McFarlane (number 06) is a member of Team Going Pro. He was found in the streets of Seattle sticking out of a trashcan, the team decided to pull him out and recruit him. Kevin defines himself as the "rusher" of the team.

Dexter "Thumbs" Manning (number 69) is a member of Team Going Pro. He was found in the streets of London, sitting in a pile of hay (according to Jordan, Dex however denies this). "Thumbs"' contribution to the team is his accent, his sex jokes, English banter, and of course, his thumbs. Another interesting fact about "Thumbs" is that he only uses a controller, contrasting the rest of his team's style who use a keyboard and mouse.

Seamus "Shamerock" O'Doherty (number 667) is a member of Team Going Pro. He was pulled out of an Irish bar in the streets of Dublin, smelling like Guinness and covered with mashed potatoes, singing "Danny Boy", eventually being recruited to the team. Shamerock had the most stickers out of his team during the first Going Pro practice.

Jordan "Jor Jor" Mathewson (number 11) is a member of Team Going Pro. Not much is known about his background.

James "One-Step" Wilson (number 8=D) is a member of Team Going Pro. One-Step was born into the industry, according to his teammates. His contribution to the team is his ability to think up to 13 steps ahead of his opponent, and his "liquid enhancer".

G.P. (number 00) was the team's mascot during the first Going Pro practice. He was depicted as a cow. He passed away due to an unknown cause, and was eventually replaced by G.P. II. He gave "Beanz" a Batman headband.

G.P. II (number 00) was the team's second mascot during the second Going Pro practice. He was depicted as a chicken. His contribution to the team was Go-Gurts and Fruit Roll-Ups. 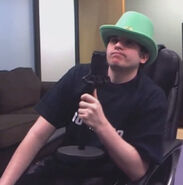 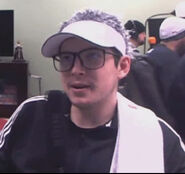 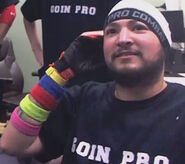 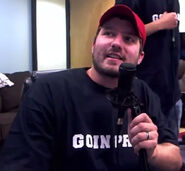 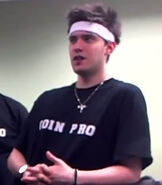 G.P. II
Add a photo to this gallery
Retrieved from "https://thecreatures.fandom.com/wiki/Team_Going_Pro?oldid=60996"
Community content is available under CC-BY-SA unless otherwise noted.