The Creature Wiki - Creatures, Series, gags and more
Register
Don't have an account?
Sign In
in: Characters, Immortal, Paragon Nova,
and 2 more

Tammy Bowdrie is Chip and Marshals sister, portrayed by Nova. Tammy was first seen and introduced in the 24-Hour LiveScream. She was introduced by Marshal as his sister, which also makes her Chip's sister. Marshal describes her as borderline useless. Tammy seems to be interested in Jordan, Immortal and Sly (Latino Boy) and kissed Sly on the cheek, she was also hitting on her own brother, Marshal. She also loves playing video games and proceeded with playing Rogue Warrior. Tammy can be described as a slut and gets turned on by a lot of things. In the end it was revealed that she was a guy. 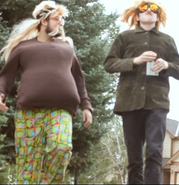 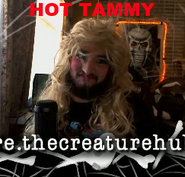 Nova as Tammy Bowdrie
Community content is available under CC-BY-SA unless otherwise noted.