The Creature Office was the "replacement" for The Creature House, and is the former communal workplace of the Creatures.

On the first of January, 2016, a video was upload to the main channel called Office Expansion. In the video, they took the down the walls of Jordan, Artist Joe and Dan's, and Spencer and Intern Joe's office. They announced how they were all going to move their offices into a bullpen in that area. On the twentieth, they uploaded a video called IKEA Desk Run in which they got tables and desks for the bullpen. Finally, on the twenty-third, they uploaded a video called Bullpen COMPLETE, in which they finally show the complete version of the bullpen. They all now work in that bullpen. It is unknown what they are now woing with the other offices.

Videos Around the Office

James in the Office.

James and Jordan in Jordan's office.

Taking a break at the office 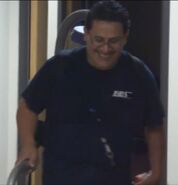 The banner at the front of the office

Prediction of the layout of the office.

Group pose in the office
Add a photo to this gallery
Retrieved from "https://thecreatures.fandom.com/wiki/The_Creature_Office?oldid=64287"
Community content is available under CC-BY-SA unless otherwise noted.