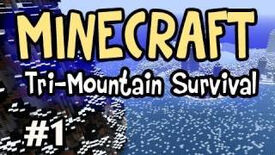 Tri-Mountain Survival was a single player Minecraft series featuring Nova. This was a custom map designed with the objective of conquering three mountains.

The series has gone down as one of the most popular single player Minecraft series that has been done by any Creature.

Many Creatures like to have a single player Minecraft series running at any given time and Tri-Mountain was Nova's throughout July 2011 and onwards. The Tri-Mountain Survival map was created by a user called BeachedHippopotamus as part of a series of "Ultimate Survival Maps".

Nova's Tri-Mountain series started with the simple goal of exploring and conquering each of the three mountains in the map. With audience participation allowing viewers to vote for which of the mountains he should do first viewers had a hand in Nova's fate within this survival. Mountain one, two (Chode Mountain) and three each had something within them for Nova to find as he clears them out from the inside out. Minecraft 4Kids (a favored texture pack of Nova's) made a welcome return during this series as Nova slowly added mod after mod, including the Elemental Creepers and sacrificing the Creeps and Weirdo's for a while in favor of Pam's food mod.

During the course of this map, Nova proceeds to get his ass handed to him on many occasions as the inhabitants of the mountains and the monsters that spawned during the night attacked him without mercy right from the start. One of the most memorable moments being the several Earth Creepers that exploded right alongside the little shack Nova builds (and later on expands) causing him to spend minutes at a time removing the dirt monument block by block. This series also saw the beginning of the Stank Ass family as well as the Elemental Creeper army.

As with most of Nova's maps, when it came to ending the series he decided to take revenge for all the times he'd died within the mountain and the many fallen Friendly Creepers that died in attempts to save Nova from horrible deaths. Thus, he took to each mountain with stacks of TNT and blew them all up, laughing as he did so.